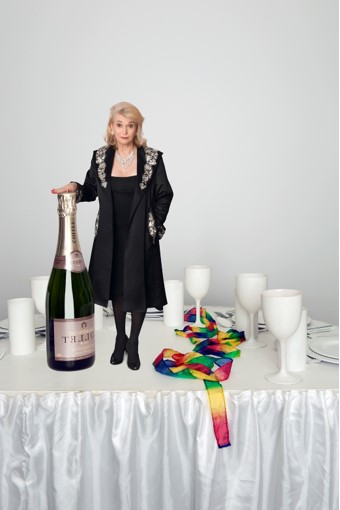 It is about all of the tiny little things that together add up to a table of wonder. There is a danger that all these things will be lost in time, like tears in rain.

Teller said of Fay’s lecture notes…… “Absolutely brilliant. Every bit of it……., and the absolutely spot-on observations on magic……..

Not a wasted word and every one of them fundamental and truthful. There’s more real information about magic and performance in this slim book than in the reams of stuff all the academics, theoreticians, and armchair magicians have put out in the last fifty years.

Fay Presto has been around for a while now, back in the 1980’s London was ready but essentially unprepared for some powerful close up magic.

The idea of a magician arriving at your restaurant table at an appropriate moment in the evening was all but unheard of. The thought of an entertainer visiting every table in the course of a black tie banquet had not crossed anybody’s mind. Anybody’s mind other than Fay Presto’s that is.

Patti Clapton was impressed, and so she found herself entertaining at Eric’s 40th birthday party Fay was amazed to be receiving rounds of applause from John Hurt and Ringo Starr.

Fay has been the Magician in Residence at Langans Brasserie ever since, 40 years makes it one of the longest residencies in the history of British Magic. Fay Presto has probably performed North of 100,000 tables.  Should know what she is doing by now.

A Gold star member of the UK’s Inner  Magic circle, she won their Close up competition in 2012, and received a standing ovation from a thousand magicians for her lecture at the Blackpool Magic Convention in 2017. Tatler, Britain’s  glossy society magazine voted her the party entertainer of the year 2000.

Her style has always been humorous, self deprecating and above all, fun. At home over a table of ten people, an intimate cabaret theatre of a hundred, or a stadium of a couple of thousand, she reaches out to the child in all of us, and makes us believe that the world might just have some real magic tucked away in odd corners of our imaginations.

There are no upcoming events.